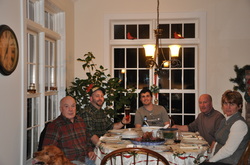 Chuck graduated from Dartmouth College in 1960 and Columbia Law School in 1963. He started trying cases in the Connecticut Courts in 1964. He was one of the first Connecticut attorneys to be certified as a civil trial advocate by the National Board of Trial Advocacy and still maintains that certification. He has been designated as a Civil Trial Superlawyer in New England and Connecticut for 2009, 2010, 2011,2012, 2013 and 2014, designating him as one of the top 5% of the profession. He has consistently received the “AV” rating in legal ability and ethics from Martindale-Hubbell. He has tried over 360 cases to conclusion in the state and federal courts and litigated and settled thousands more. He is consistently engaged in preparing over 25 cases for trial and is assigned for trial in court for approximately one case per month.

He is currently a member of the Connecticut Trial Lawyers Association.

Beth Ann Brower received her paralegal degree from Mattatuck Community College in 1991, and her bachelors degree in legal studies from the University of Hartford in 2003. She has participated as a paralegal in hundreds of cases in the state and federal courts since 1989.

We will respond to your inquiry in a timely fashion. Thank you.